In this series titled Different Business Voices, I am taking a look at how companies use their voice to have effective marketing. Remember that a business voice is the tone, approach, and medium expressed to the consumers.

Let’s dive into the Deadpool movie franchise. All successful marketing strategies involve knowing your audience and how to guide your voice at them. We’re taking an in-depth look at how these movies are marketed and how people respond to their voice.

Who is the Target Audience?

According to research, the largest demographic is men aged 17-34. The films R rating definitely seems to fit with the audience. The announcement of the rating itself was part of the strategy. A fake interview was set up between Mario Lopez and Ryan Reynolds. After announcing a PG-13 rating, Deadpool shows up and “takes out” Lopez to announce the true rating of R.

What is the mission statement?

“As the digital revolution reshapes all aspects of the entertainment industry, 20th Century Fox remains on the forefront, embracing new technologies that take our audience deeper into our films. From thrilling animated features to special effects that make our super heroes leap and fly off the screen, our mission is the same as it was over a century ago, give people the simple pleasure of being transported by a story on a screen.”

They certainly do not disappoint with transporting you into Deadpool’s world.

How Do They Produce?

First off, Deadpool originally appeared in a series of comics titled The New Mutants in 1991. The nickname “Merc with a mouth” stuck with the character and adequately describes him as he often jokes. Breaking the fourth wall is something he does regularly. This keeps the jokes flowing. There is some controversy involved because the creator is accused of ripping off popular Teen Titans villain named Deathstroke. The creator just thinks it is funny. Of course, he gives them the same last name of Wilson.

However, one of the character’s first live-action appearances was in the 20th Century Fox movie X-Men Origins: Wolverine. Ryan Reynolds, the actor portraying Deadpool in the old and current movies, was asked to play the character exceedingly differently from his comic book counterpart. Determined to fix this crippled voice from before, 20th Century Fox certainly took a risk with their less than conventional advertising strategy. Taking a more family friendly approach to the character did not work. Instead, Fox took a more faithful adaptation to the comics.

The tone used now is dark and sarcastic to mimic the voice of Deadpool himself. Also, the approach is again non-conventional but effective. Let’s see how they produced through mediums.

The first thing Fox did to promote the film was posting Deadpool lying on a bear skin rug. Other ones include 12 Days of Deadpool (Christmas), Deadpool Academy Award statue, Deadpool as Bob Ross, Deadpool for president and so much more. Do not underestimate the power of social media for spotlighting movies, either, as this can be the most powerful medium. Ryan Reynolds himself was a champion for the movie. He posted on his Twitter feed frequently while holding question and answer sessions. All of these kinds of promotions definitely gambol towards young adult male humor.

Also, the voice for the first Deadpool movie was even used for the premiere on February 12, 2016. With Valentine’s Day so close, Fox devised a movie poster in the form of a romantic comedy. This still enacts toward the target audience because the fans find this funny knowing its true nature.

How has the franchise fared so far? The first Deadpool movie surpassed all expectations enormously. A budget of $58 million is quite meager for a superhero film especially since the movie grossed nearly $800 million worldwide. Deadpool 2 accumulated nearly $600 million. It is safe to say that the business voice chosen was lucrative. Keep an eye out for more Deadpool in the future!

Need to revamp your business voice so your company can become exceptional? Contact us today! 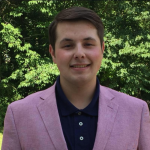 I'm a marketing intern from Jacksonville State University, but I don't just get people's coffee here!